So happy with this company-have used them again and again

Wow so beautiful look amazing on my products.

Fantastic quality products at a great price! Colours are strong and smell beautiful

B
BeastiesBotanicals
Beautiful dried flowers, they look gorgeous in my hand made...

Beautiful dried flowers, they look gorgeous in my hand made paper! Thanks

These are just beautiful and perfect for my crafts..

There’s such a great selection of tea but the one I bought is sublime! Tastes great, came packaged eco friendly and came very quick. Very satisfied :)

Always good quality products from here and good service with quick delivery.
I sprinkle these pretty flowers over delicately flavoured teas. They make it extra special x
Thank you x 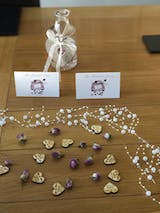