These, & all Annatto seeds are so very hard, they would need an industrial grade grinder. They broke a new ceramic grinder I had put them in. However, the colour leeches out into either water or olive oil & this can be used in cooking. The colour is full of a very healthy type of Vitamin E so it is the colour that is the valuable part.

E
Ethel Orn
It arrived promptly, nicely packed! And re... 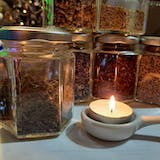